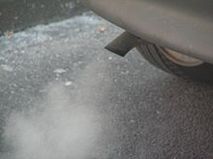 Motor vehicle emissions are composed of the by-products that comes out of the exhaust systems or other emissions such as gasoline evaporation. These emissions contribute to air pollution and are a major ingredient in the creation of smog in some large cities.


Cold engines
During the first couple of minutes after starting the engine of a car that has not been operated for several hours, the amount of emissions is very high. This occurs for two main reasons:

Considering that a substantial amount of trips are short, this is a major issue to improve air quality conditions.


NO x
Smog in New York City as viewed from the World Trade Center in 1988. A 2009 report indicates that, despite the City's air being close to the EPA's short-term ozone standard, that New Yorkers still face a 25 per-cent increased risk of dying from lung disease.[8]
Mono-nitrogen oxides NO and NO2 react with ammonia, moisture, and other compounds to form nitric acid vapor and related particles. Small particles can penetrate deeply into sensitive lung tissue and damage it, causing premature death in extreme cases. Inhalation of such particles may cause or worsen respiratory diseases such as emphysema andbronchitis. It may also aggravate existing heart disease.[9][10][11] In a 2005 U.S. EPA study the largest emissions of NOx came from on road motor vehicles, with the second largest contributor being non road equipment which is mostly gasoline and diesel stations.[11]

[edit]Volatile organic compounds
Non road equipment is mostly gasoline and diesel stations.[12]
When oxides of nitrogen (NOx) and volatile organic compounds (VOCs) react in the presence of sunlight, ground level ozone is formed, a primary ingredient in smog. A 2005 U.S. EPA report gives road vehicles as the second largest source of VOCs in the U.S. at 26% and 19% are from non road equipment which is mostly gasoline and diesel stations.[12]27% of VOC emissions are from solvents which are used in the manufacturer of paints and paint thinners and other uses.[13]

Ozone
Ozone is beneficial in the upper atmosphere, but at ground level ozone irritates therespiratory system, causing coughing, choking, and reduced lung capacity.[14] In the United States, ozone is responsible for an estimated $500 million in reduced crop production each year.[15]

[edit]Hazardous air pollutants (toxics)Chronic (long-term) exposure to benzene (C6H6) damages bone marrow. It can also cause excessive bleeding and depress the immune system, increasing the chance of infection. Benzene causes leukemia and is associated with other blood cancers and pre-cancers of the blood.[18][19]

Particulate matter (PM10 and PM2.5)
The health effects of inhaling airborne particulate matter have been widely studied in humans and animals and include asthma, lung cancer, cardiovascular issues, and premature death. Because of the size of the particles, they can penetrate the deepest part of the lungs.[20] A 2011 UK study estimates 90 deaths per year due to passenger vehicle PM.[21] In a 2006 publication, the U.S. Federal Highway Administration (FHWA) state that in 2002 about 1 per-cent of all PM10 and 2 per-cent of all PM2.5 emissions came from the exhaust of on-road motor vehicles (mostly from diesel engines).[22]

Carbon dioxide (CO2) Carbon dioxide is a greenhouse gas. Motor vehicle CO2 emissions are part of the anthropogenic contribution to the growth of CO2concentrations in the atmosphere which is believed by a majority of scientists to play a significant part in climate change. Motor vehicles are calculated to generate about 20 per-cent of the European Union's man-made CO2 emissions, with passenger cars contributing about 12 per-cent.[23] The European Union average new car CO2 emissions figure dropped by 5.4 per-cent in the year to the first quarter of 2010, down to 145.6 g/km.[24] 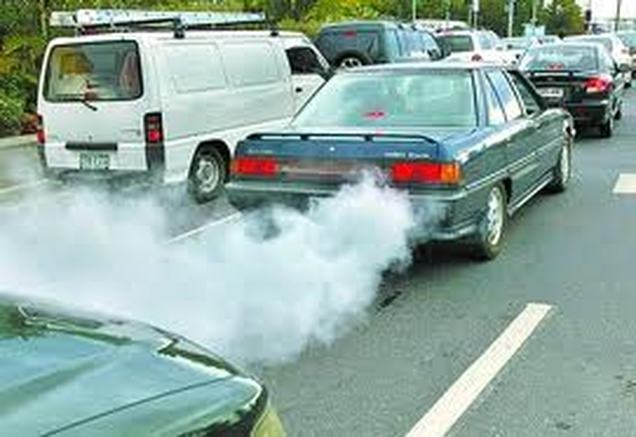